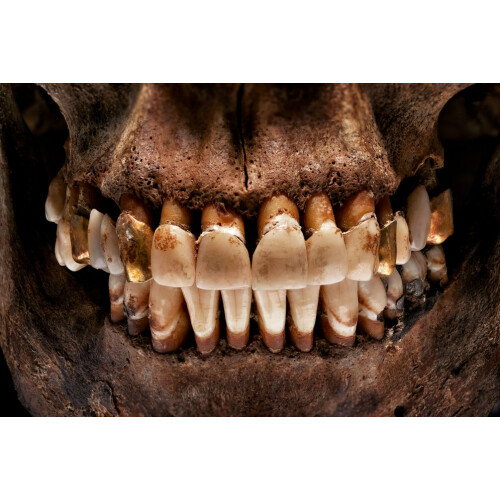 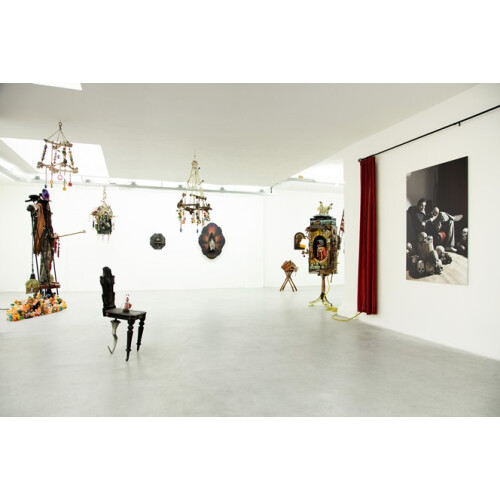 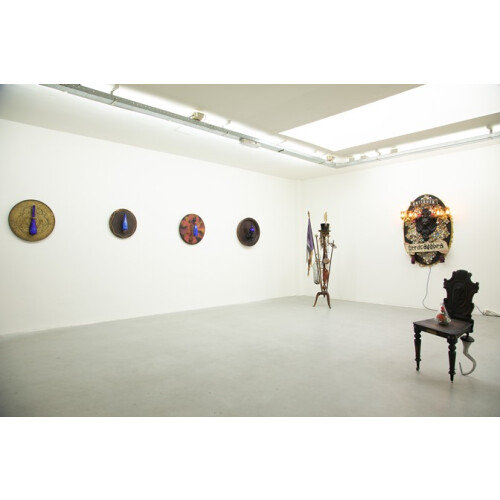 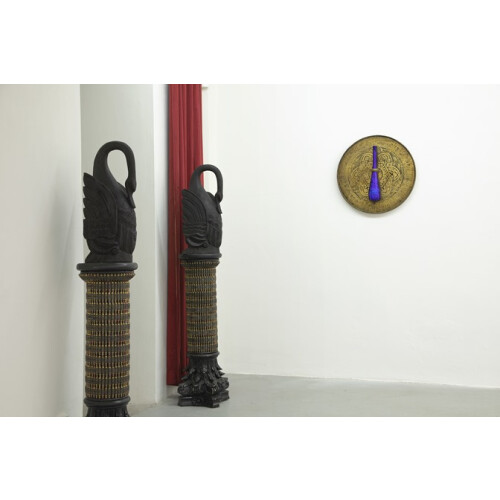 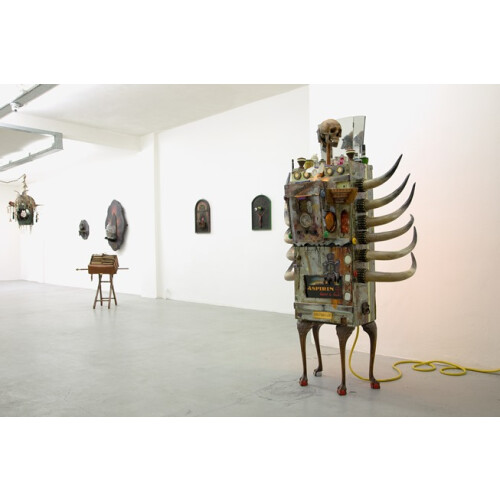 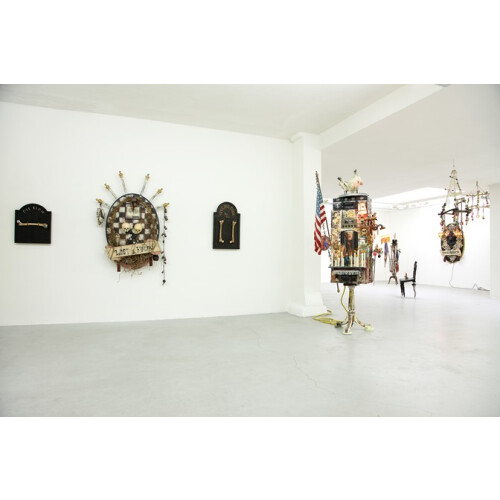 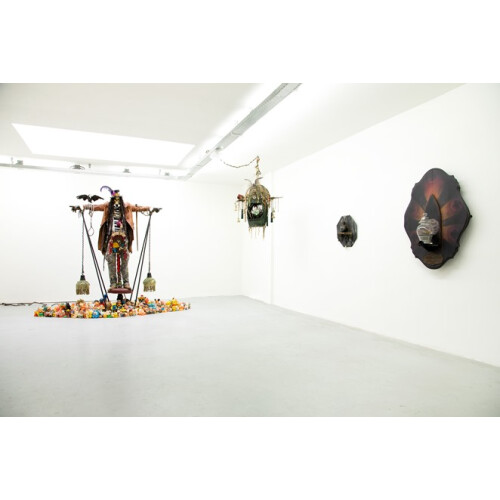 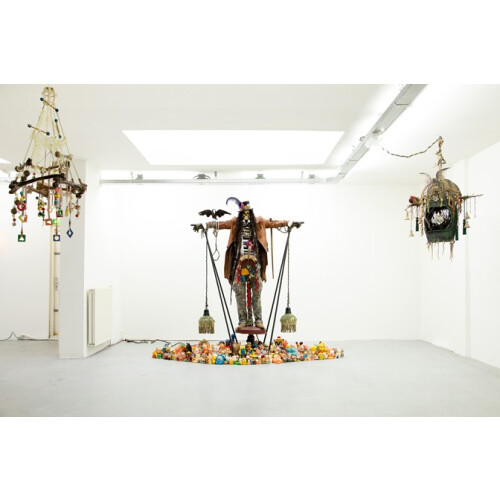 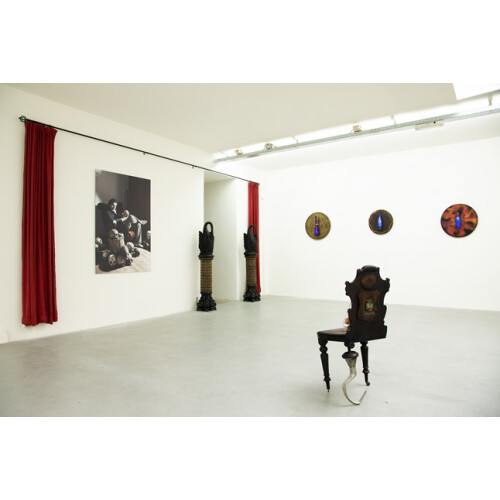 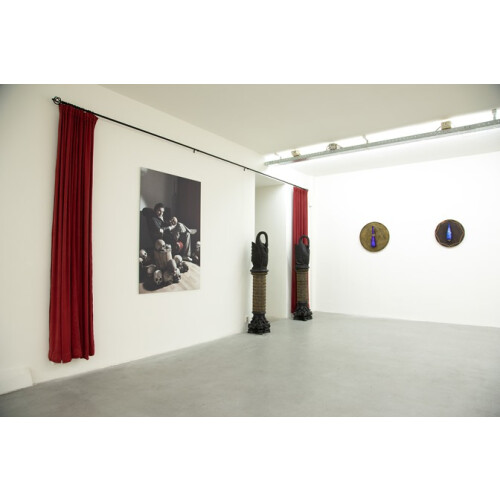 Don’t it feel like the wind is always howling?
Don’t it seem like there’s never any light!
Once a day, don’t you wanna throw the towel in?
It’s easier than putting up a fight.

The orphans in the filmmusical Annie (1982) had a hard time. Their existence was a 'hard knock life'. That is what Midas Zwaan is known for. He had a burnout three years ago and his father passed away not much later. It was the beginning of a long-term illness.

Zwaan's artwork Hard Knock Life - on display at Art Rotterdam 2019 - symbolizes his depression. It is a fight in which there is no room for maneuver to move freely and to release the muscles in preparation for a right-wing direct or liberating uppercut. The fists are clenched but cramped, trapped under a dome that offers a view of the outside world but does not allow access. The boxing gloves are soaked - with sweat or tears or both. The salt has affected them. Instead of handing out physical blows, they have absorbed mental blows like a sponge. It has made them brittle and vulnerable.

Hard Knock Life also symbolizes the victory of depression. Zwaan did not throw the towel into the ring. He is broken out of the bell jar, the invisible straitjacket shaken. He is back at work and his solo exhibition SSSssshhh ...... !! marks his comeback. In fact, it is by making art that he has controlled his illness. And he has come out differently, stronger.

As a contemporary surrealist, Zwaan expresses his personal emotional life in a way that leads to recognition, wonder and confusion. In the beginning of his career he did so in the form of viewing boxes in which he reflected on his youth. The crates and potato boxes filled with knick-knacks functioned like dioramas of his subconscious.

Gradually, the works have become bigger and more complex. Zwaan used various materials and processed electronics and lighting in his assembled sculptures. The artist finds his raw material in thrift shops and antique shops, in flea markets and internet forums, or at home collectors. He now has a considerable stock of objects, varying from bed jars and knitted knives to hats and canes.

They are rejections, regarded by others as worthless and degraded from property to obstacle. They no longer participate in the consumer society in which only new and shiny counts. As a kind of voodoo priest, Zwaan breathes new life into them. By brushing up, ritually editing and combining in unexpected ways, he transforms them into relics, souvenirs and fossils through which the spirit of time flows. They tell the stories that are embedded in their past and create new stories about a possible tomorrow.

Zwaan images are visual box jumps, in which the fusion of dissimilar objects evokes unexpected associations. They deal with the (im) possibility of communication, the ordering of artefacts to understand the unknown other, the escape in fantasy that sometimes is but reality. And about death. Death is inextricably part of life at Zwaan. Death has touched the materials with which the artist makes his work and is therefore no longer untouchable. Death is no end but an intermediate station in the cycle of life. Zwaan recycles everything, including death.