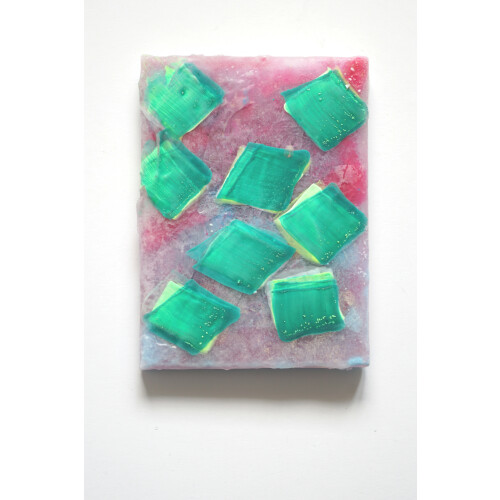 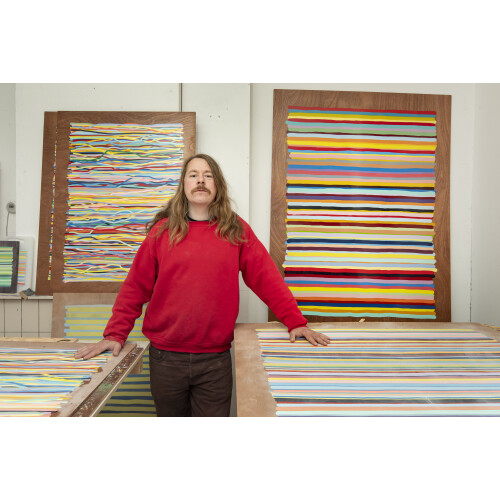 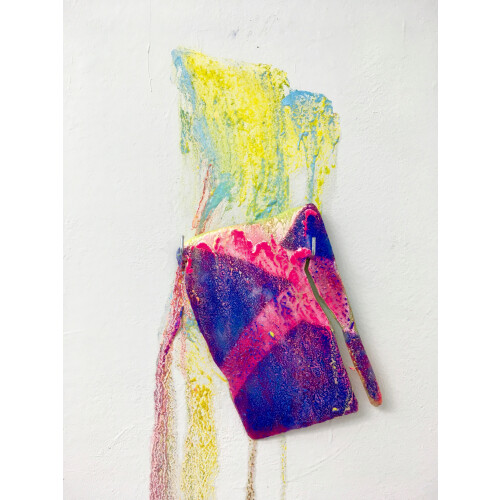 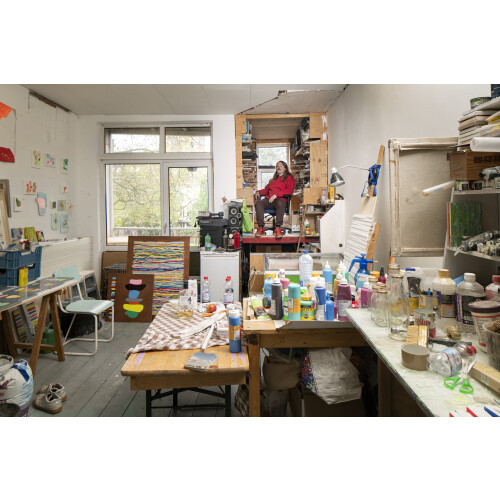 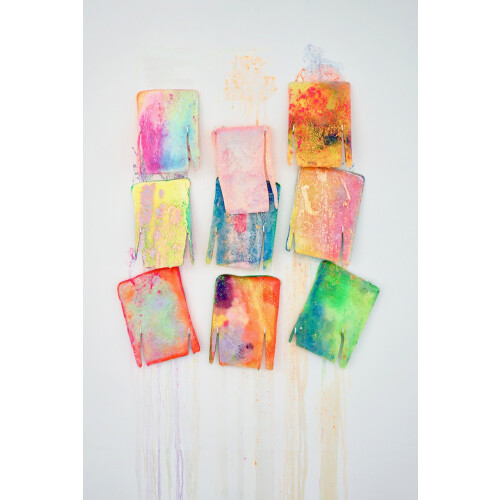 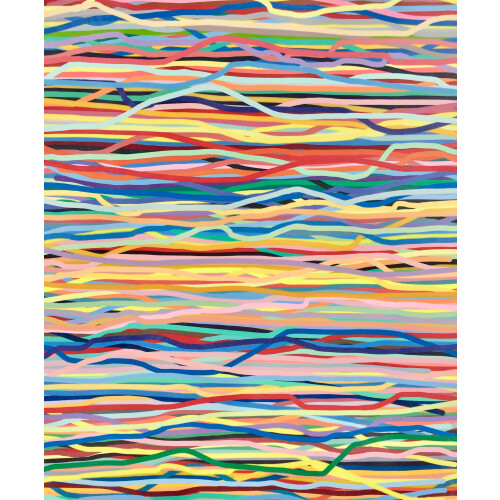 A painting records choices. It enumerates the artist’s actions like a visual logbook: which paint was the brush dipped in, where was it applied to the canvas, how forcefully and in which direction did the brush subsequently move and where was it lifted off again. Time and again, layer upon layer.

Observers interested in more than just the depiction will try to reconstruct that process. Which brush stroke came first and how did it effect the next? Why was that detail added and another section painted over? Yes, I noticed, despite your attempts to conceal it. Just like the pink you hid so effectively underneath your black in order to make the darkness glow.
Daan den Houter’s painterly work is immune to this type of mental reverse engineering. Den Houter takes almost sardonic pleasure in creating works that look clear cut, almost straightforward at first sight, but turn out to be totally indecipherable upon closer inspection.

Den Houter fed art works through a shredder years before Banksy turned that activity into an auction house stunt. Only extremely patient puzzlers could make something out of the resulting spaghetti. The Overpainted Painting also challenges the traditional analysis of paint on canvas. Every next artist to add a layer incorporates his predecessors’ actions, blurring the line between conscious decision and echo from the past.

Den Houter’s epoxy paintings in his current exhibition again undercut expectations and premises. For one, these panels haven’t ‘simply’ been painted, but rather milled and cast. The artist first gouges crevices into the wood, then fills these with epoxy, one by one. The material has to dry before a next line can be laid, and, right at the end, everything is sanded down. This takes days, if not weeks. But the perfect, almost industrially smooth end result doesn’t reveal that. The working order can sometimes be detected, one line on top of another, but Den Houter also plays with contrasting colours that create an optical sense of depth suggesting otherwise. The eye thinks it’s got a grip on this seemingly simple linear pattern but gets taken for a ride.

Den Houter’s ice paintings are even more extreme. They not only obscure time as a production factor, but completely erase it. Normally a painting gains structure the more you look at it because you see more clues to its creation. Ice paintings are self-defeating visual logbooks. They disappear as you look at them and in the end there’s nothing left but a colourful puddle that could be called a composition, but probably wasn’t intentional on the artist’s part. Naturally, Den Houter selected the colours and combined them in a certain constellation, but the swirl on the floor does not enable the reconstruction of Den Houter’s work.

The ice paintings’ destructive beauty is reminiscent of melting polar ice or the fantastically coloured, yet lifeless cadmium lakes that Edward Burtynsky likes to photograph. But while these environmental disasters result in long-term damage, all that remains of the ice paintings is a vivid memory. Den Houter happily sabotages the art world premise that work is typically made for eternity. He also cares little about the art market, that doesn’t think art that melts as soon as it’s taken out of the freezer is particularly good business.

Den Houter proposes some strong statements. And he does so without aplomb. A shrewd marketeer might have promoted this show as The End of Painting as We Know It or Art Killed by Time. But no, Den Houter chose something unpretentious and devoid of drama: SO WHAT

You can almost hear the artist’s familiar laughter, the practical joker’s teasing fun. He’s pulled it off again and is soon to return to his beloved studio, where he can demolish another few conventions and produce more art.

Daan den Houter is a multidisciplinary conceptual artist. The visual language he uses to externalize his ideas varies from video, installation, and sculpture to activities where he allows the public to become part of the artwork. Money, identity, art, its granted value and generally accepted perceptions of these themes are what Den Houter’s work evolves around.

Den Houter observes society as a participant, then takes a step aside, analyses it, and touches a raw nerve by doing so. 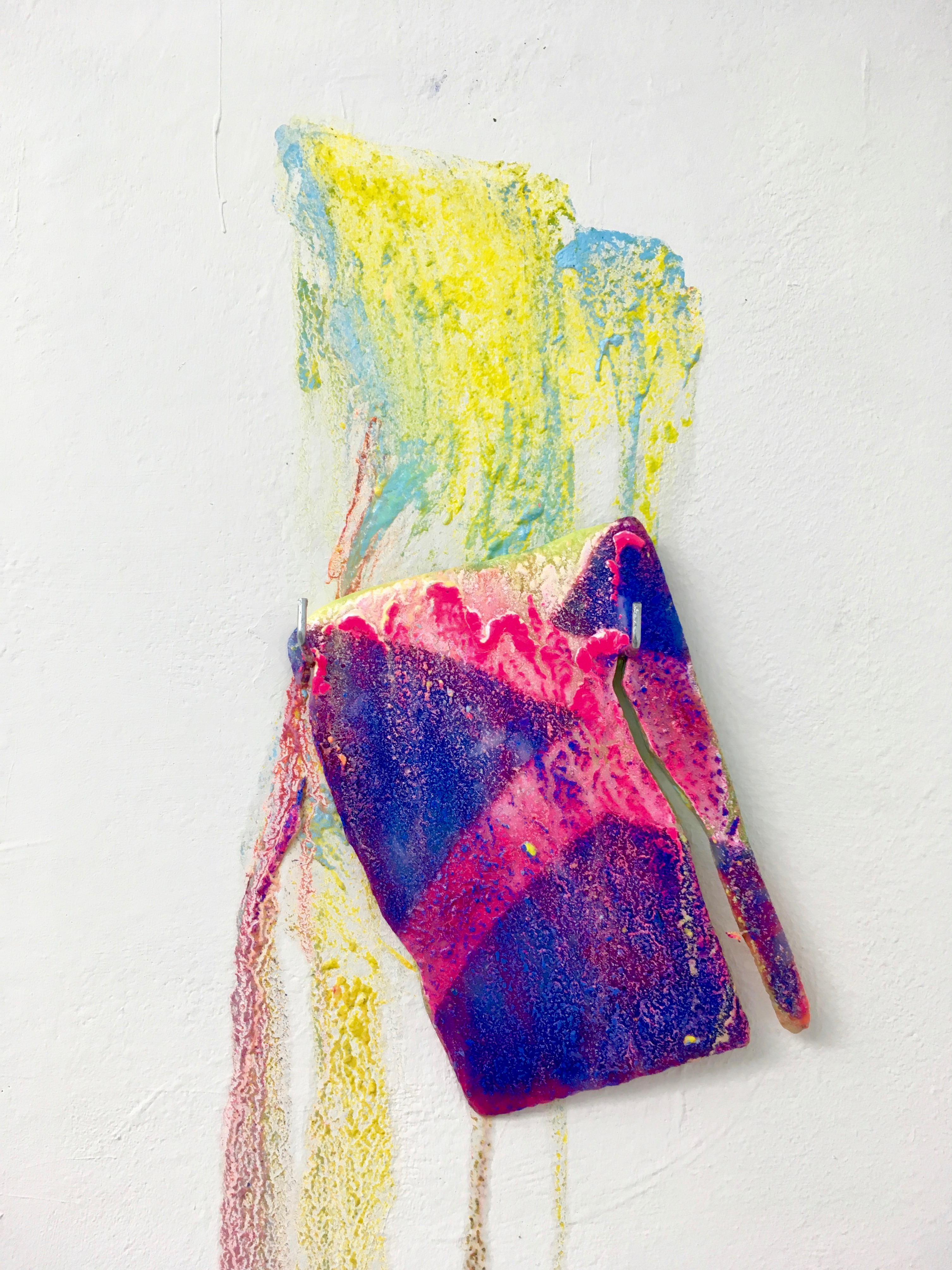 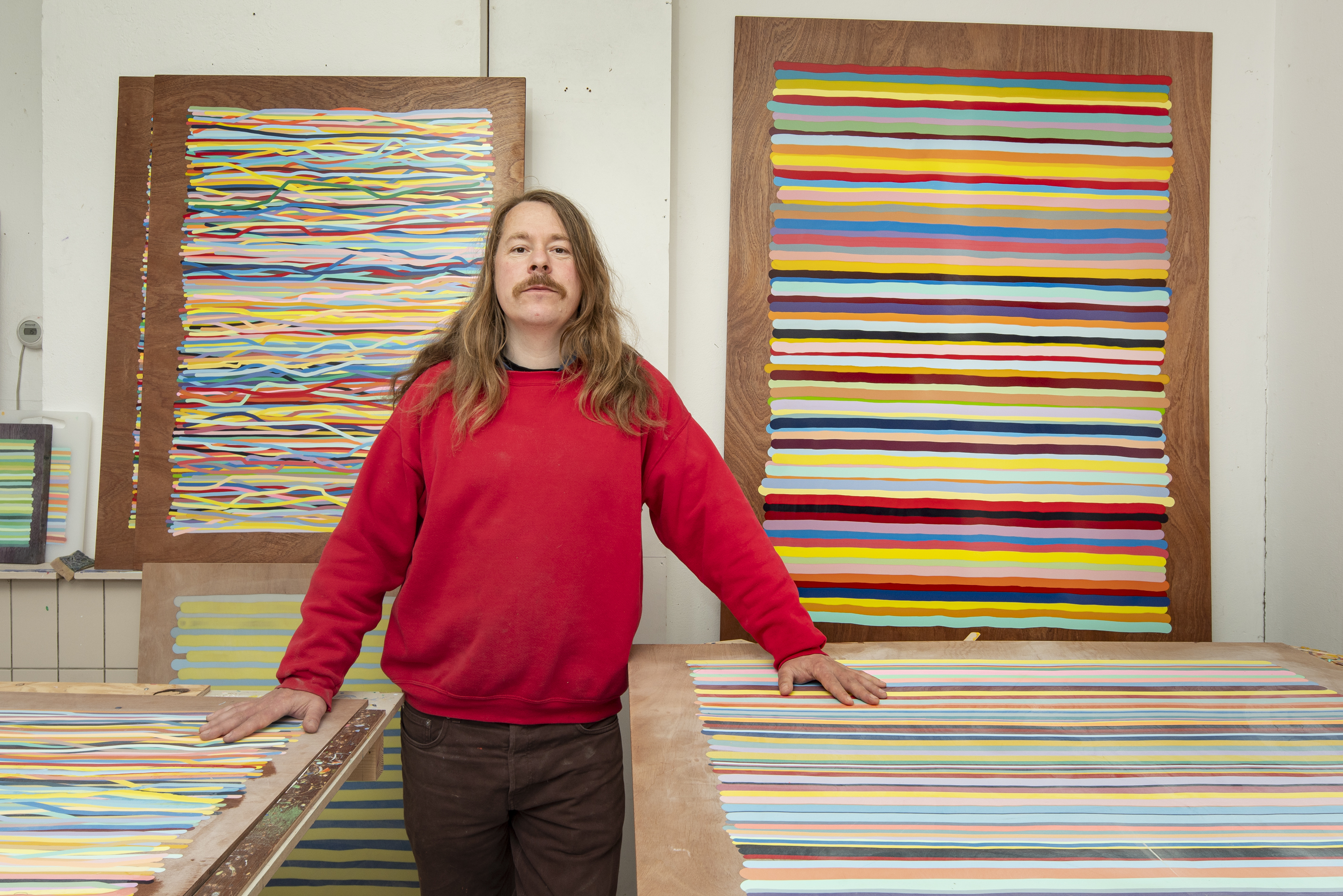 The paintings from the series Stripes (2018 - ongoing) seem to be a cross-section of many painted layers. One thinks one sees a stripes painting: nicely glossy, smooth polished, and colorful is the surface of epoxy resin. There is a variation in the width of the stripes and you can choose from two formats. What you don't see, however, is the extraordinarily laborious process. For each individual color, a groove is milled into a wooden board, filled with pigmented resin, which then has to dry and can be polished. The stripes are not too tight; they look like strings of toothpaste with round ends and seem to lie loosely over each other. The colors are distributed in such a way that they reinforce each other and have a sparkling effect. 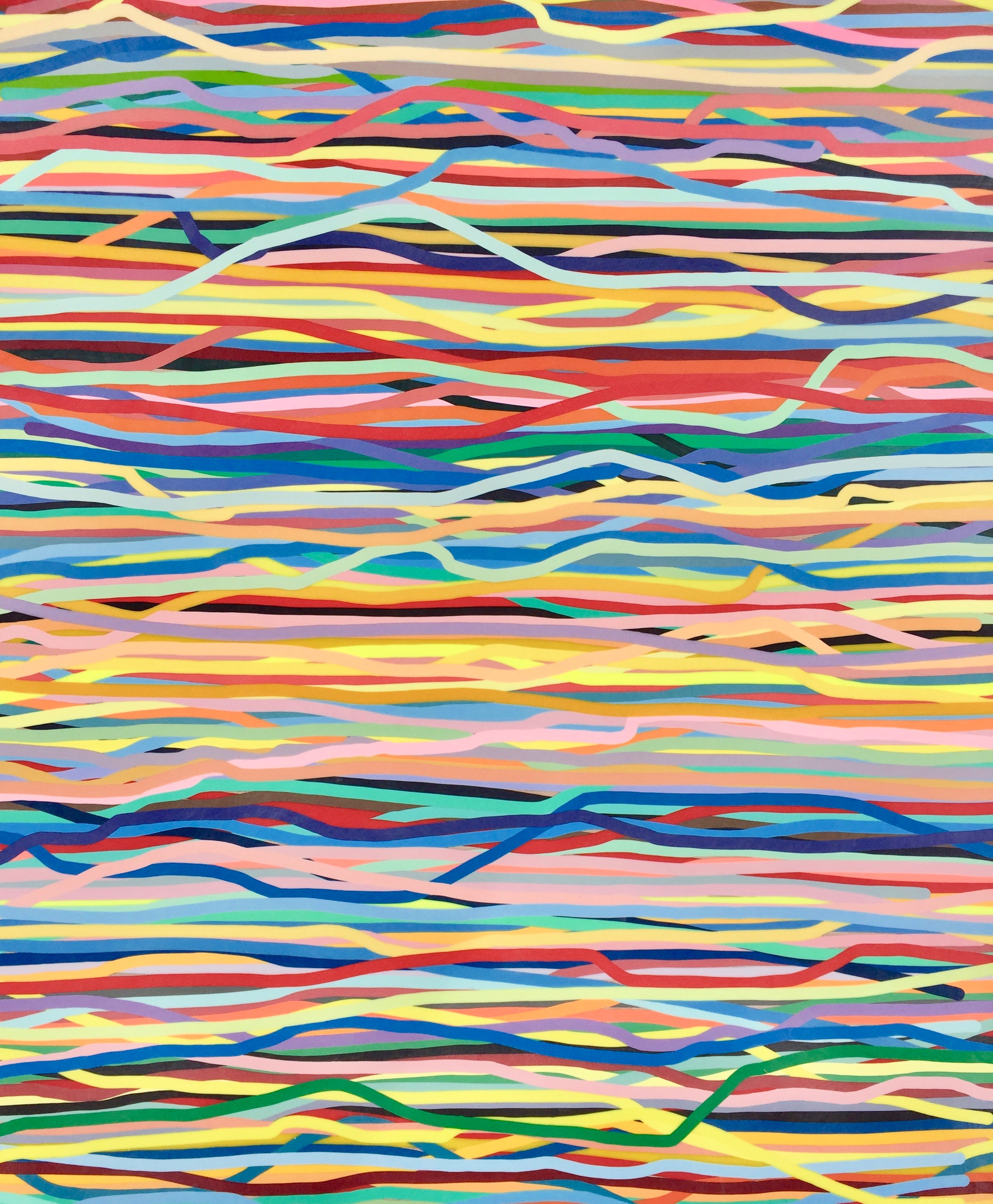 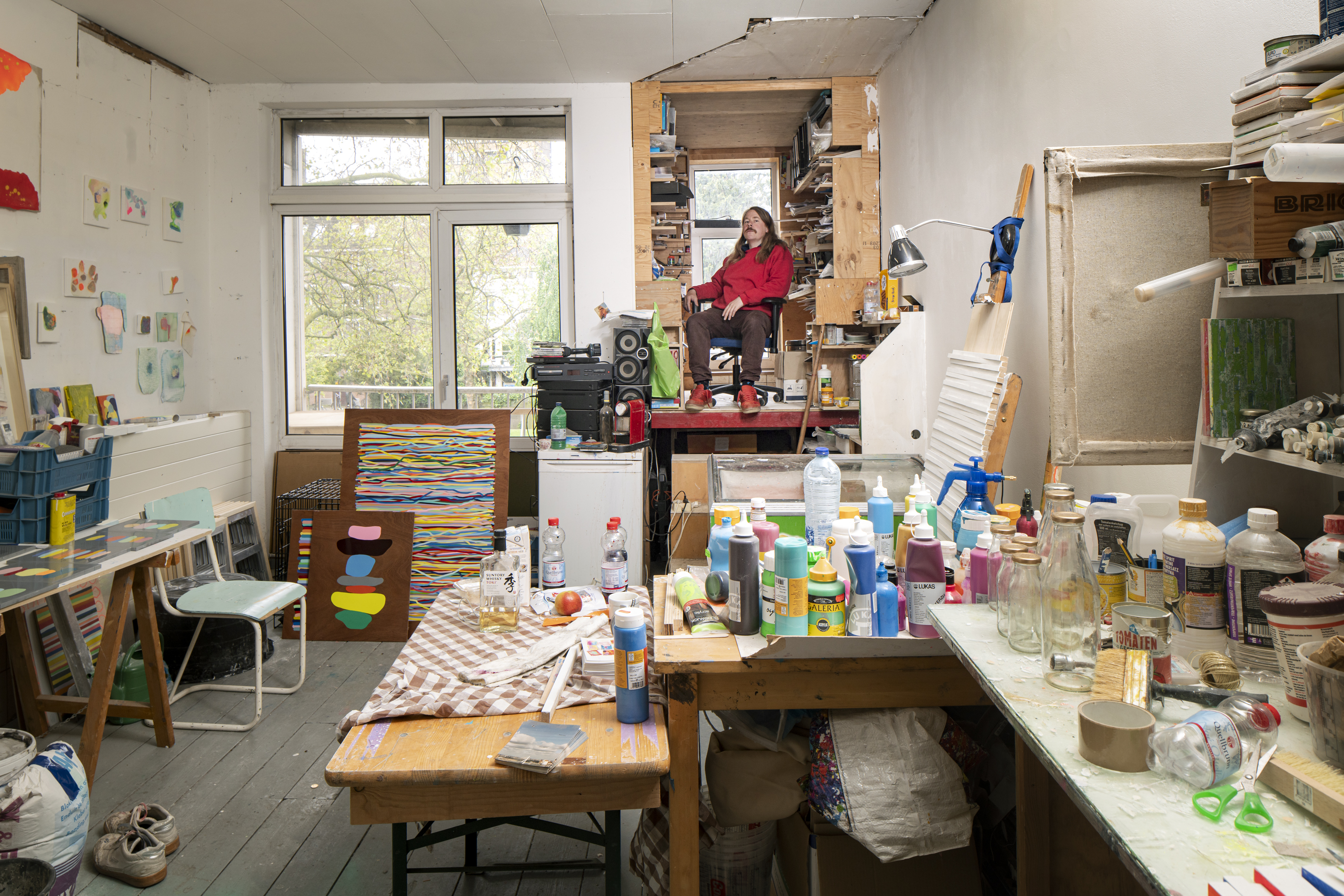