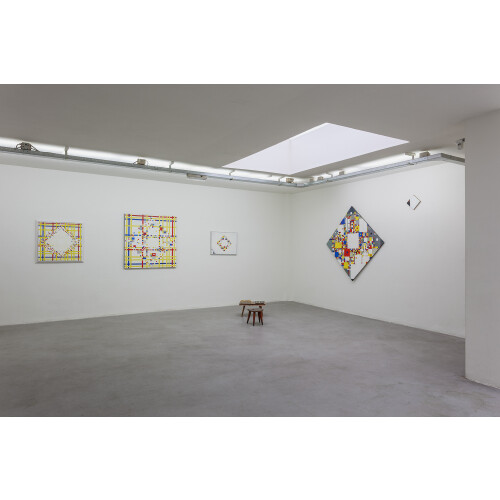 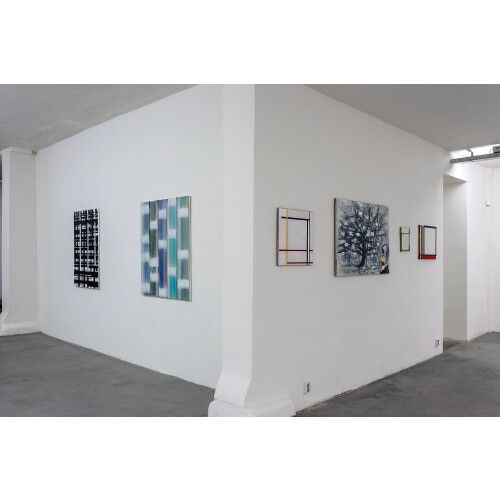 A duo presentation by Diederick Van Kleef and Mike Ottink.

Analogous to the title, Ottink and Van Kleef are apparent opposites.

Their first meeting, 22 years ago, in "Sporadisch Antiquarisch", the then art, cult and curiosa bookshop-gallery, of Van Kleef at the Sarphatipark in Amsterdam. Ottink was looking for a handbook about Derek Bailey, an obscure, English, avant-garde and atonal, jazz-noise guitarist, and miraculously, spot on at Van Kleef!

It is not surprising, this place was a magnet for creatives, exhibitors, hoarders, collectors, academics and VIP’s. It was a creative resource, springboard, disputation place and library for all kinds of cool cats.

Ottink still lives at the Sarphatipark, Van Kleef has transposed all his belongings to estate 'La Brelandiere' (Female Card Player) in France.

Their encounters with curious idea’s, experiments, images, sound and language, ever since continues ad hoc, and in an improvised manner.

Mondrian and van Kleef, a quest for kinship

When Van Kleef heard that his hero Piet Mondrian continued to make corrections / improvements to his paintings, this gave him the idea to look at Mondrian's oeuvre and development with a renewed open mind.

The initial commitment and challenge, was; "Continue where Mondrian had not got around to."

This led to a twelve-year study instigated by a sense of collegial kinship and the desire to artistically understand this kinship.

By empathizing 'as an actor' in the imagination, intention, internalization and externalization of his benchmark, van Kleef culminates in sublimated painting.

Where Mondrian developed from a neo-plasticist to a utopian abstract realist, van Kleef distilled, as the crux of his research, Mondriaan the intuitive painter.

In his projects Mike Ottink playfully examines sensory perception and experience. Intuitive-ly he works on his own visual language in which transitions occur from one sensory dis-cipline to another. His current paintings have evolved out of drawn graphic scores. Auto-nomous pictures cite ‘volatile’installations or performances of sound and moving images. They are an alternative to sound, photo, or video recording, which in his view, corrupt the moment of execution.

These works resonate the ideas of David Bohm on ‘Quantum Cohe-rence’: ‘The fabric of reality is a holistic medium where everything coexists with everything else’. The so-called Ímplicate Order’.

In tune with ideas of stretching perceptual borders, Mike Ottink designs and builds his own drawing and painting tools. Through collaborations such as Amsterdam’s VHSUHF he also creates musical instruments and techniques in the contect of audio-visual performance. In an effort to evoke, experience, and express the invisible, as well as the inaudible, his works stand as the intuitive science: the alchemy of noise and the desire to find something universal and tangible within.