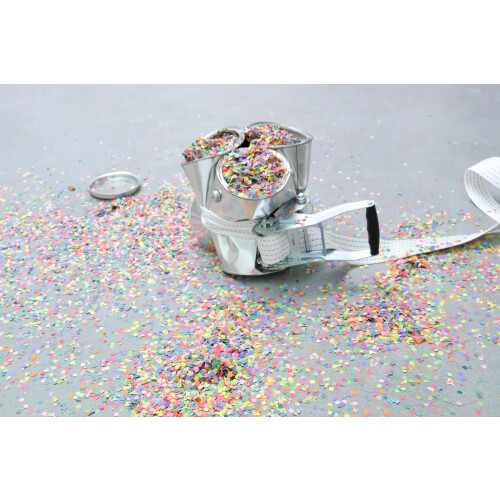 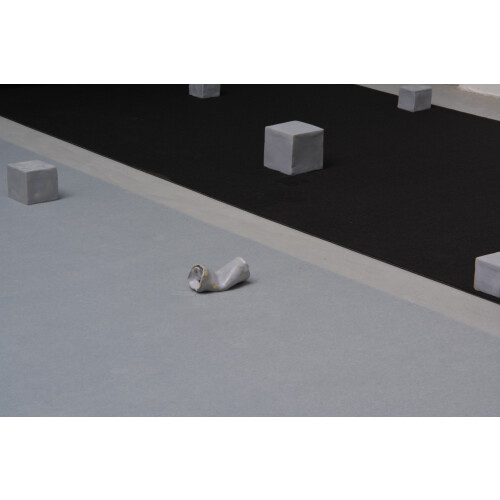 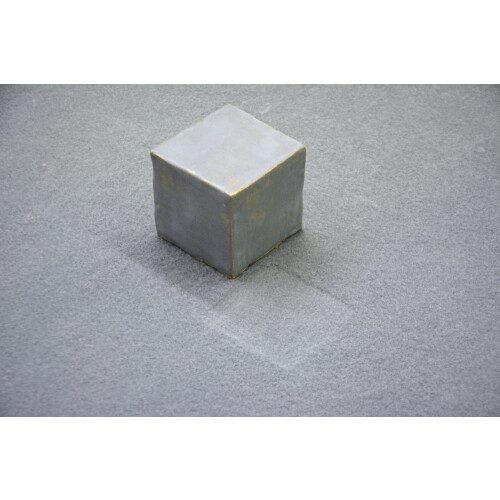 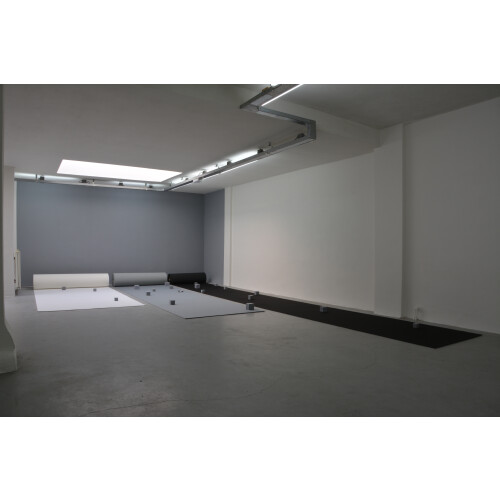 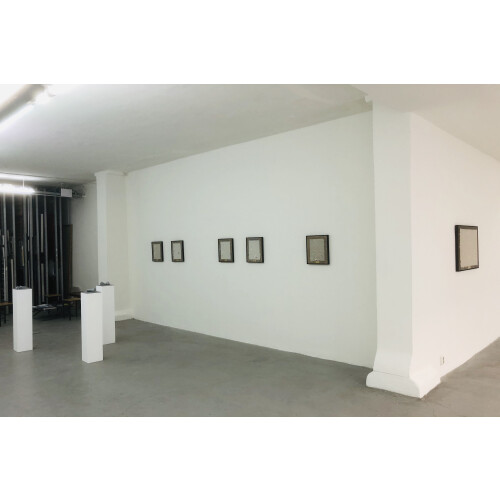 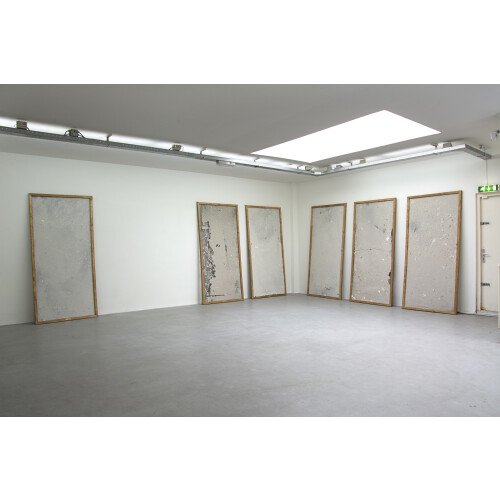 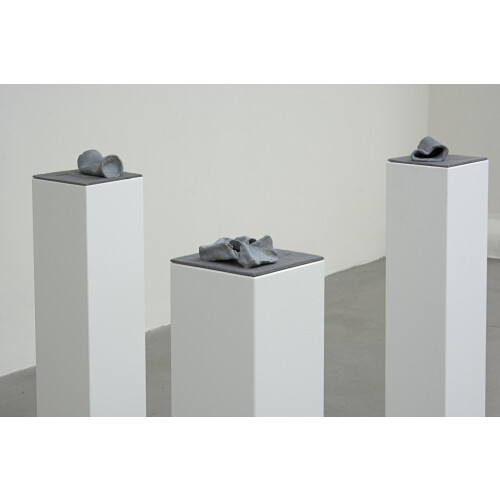 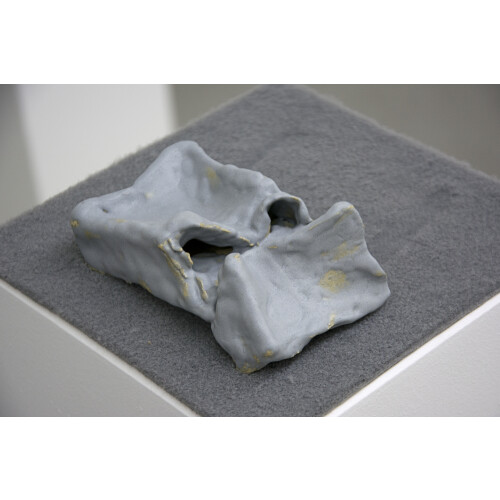 White rectangular surfaces on yellowed walls where there used to be framed pictures or a removed bookcase that has left imprints in the carpet: these kinds of traces of daily life, which are usually overlooked. Once noticed, however, they point out the absence and transience of things. At the exhibition To leave the trace, Ties Ten Bosch examines what is hidden and forgotten and creates works that focus on memory and the passage of time. In this way, for example, the work Some other memory explores time-bound elements, such as presence and absence. Three roles of carpet of different width are partially rolled out, side by side in the room. One is black, one gray and one white. On the carpets are small gray ceramic cubes that, viewed from a distance, get their own independent dynamic, as if they were stopped in the middle of their movement. As we get closer we can see that the cubes seem to have a somewhat worn appearance. We also see various imprints in the carpet. It is obvious to associate the prints with traces of the ceramic cubes. This creates room for interpretation of what happened here and the prints become visible witnesses of time. The sublime of this work shows itself in this narrative moment.

On the carpet there are more than twenty ceramic objects, almost all cubes. However, one is different. It is reminiscent of an everyday object, although it cannot be fully defined because of its gray color and undefined shape. It seems up to the viewer to think about the formally known and to supplement the unknown. This ceramic object behaves as an indication of something we know, but it is not an exact copy of it. This gives the viewer a reminder of an object that was never originally there.

Further on in the exhibition space there are several objects of this kind, made by Ties Ten Bosch and presented with pieces of carpet on pedestals. You can recognize a cigarette pack, a coffee cup and also a coke can. They are primarily things that symbolize unnoticed traces of our daily lives. They have been reformulated and placed in a new context. Here too, the pieces of carpet have been processed so that a presumed impression of the original object is visible, as if it is inextricably linked to the object.

Similar traces of human beings are also the main component of the work In coffee we trust. Ties shredded paper coffee cups that he found on the street in Berlin and made more than human-sized, hand-made paper sheets out of them. In addition, all kinds of elements that were in the paper cups at the time of finding, were processed. Such as cigarette butts and leaves. Moreover, we also see a lot of plastic, since paper coffee cups are not only made of paper, but also of plastic. All these elements are clearly reflected in the newly created paper and have thus become part of the artwork. The sheets of paper are still on the sieves with which they are scooped, creating the impression that the whole has just been made and placed there to dry. This creates a narrative lightness. The process can continue any time. By setting the objects up straight makes the irregularity of the coarse paper even more visible, creating the impression of a landscape. Ties Ten Bosch thereby underlines the beauty of everyday life.

Squeezing out a party actually speaks for itself: three metal cans are pinched together with a strap and are brought to explosion by the artist through a performative act. When the cans pop open, confetti shoots up like a fountain and spreads through the room. Where the tightening of the strap takes a longer period of time, the climax is only a short moment. It is over before you know it. The confetti turns into a trail of the action in which the cans were squeezed and gives us a reminder of what happened. The work creates a playful, relaxed atmosphere that captures the transience of a moment.

Ties Ten Bosch emphasizes the traces of daily life. The things that we seem to overlook are becoming interesting again and appeal to our collective memory. He encourages the viewer to question everything that is familiar. What does it actually mean To leave the trace? It gives us two options: leave a trail or leave the trail. The first refers to something that has existed, the second to unknown ways and the new - or to the judgment of Walter Benjamin "a trail brings close, what is far away".

Portfolio - To Leave the Trace